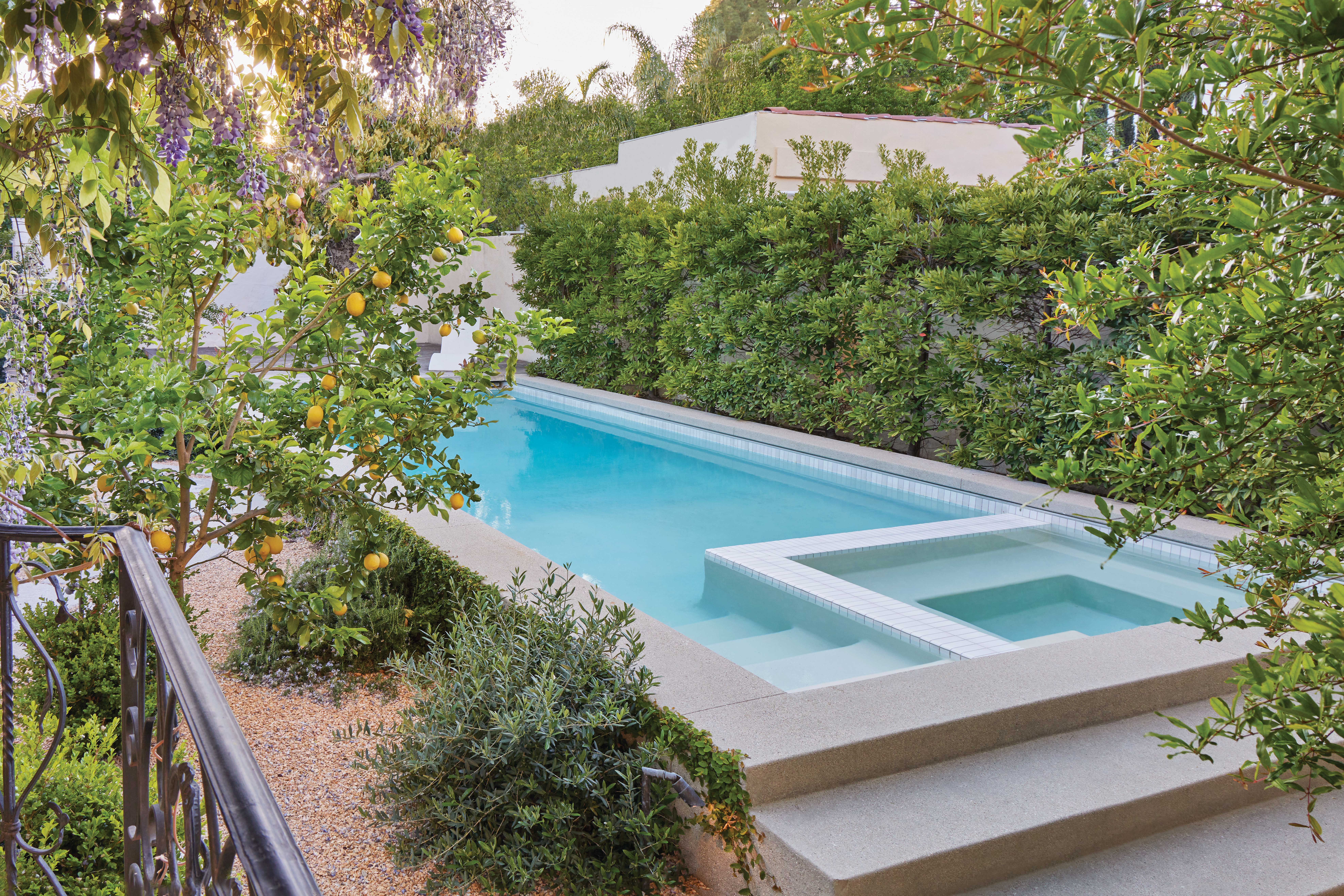 When Andrew Bird and Katherine Tsina moved into their home in Los Angeles, a vaguely Craftsman 1920s house typical of the mashup architecture of the era, the backyard was, as Bird puts it, “a bit confused.” Having gone through many iterations over the decades, it was dotted with fruit trees, a neglected patch of grass, a massive avocado tree, an abundance of wisteria, and various incongruous plantings. It was lush and overgrown, “like a romance novel,” says Bird.

Bird, the multi-instrumentalist singer-songwriter, and Tsina, a fashion designer, wanted something that better suited their aesthetic. They longed for a calming retreat in the middle of the city that channeled the feeling of a countryside vacation, specifically an Etruscan house where they spent part of a summer in Tuscany. Plus, they wanted it to be hardy enough to hold up when they were out of town. “In the past we were traveling so much we wanted something that was low-maintenance and could take care of itself,” says Tsina.

The couple hired landscape architecture firm Terremoto to reimagine the space. “We didn’t want to entirely erase the history of the family that lived there before,” says Terremoto co-founder David Godshall, “but we wanted to take it into new territory.”

So they preserved some elements that felt Mediterranean, kept a few of the fruit trees, the avocado tree, and that romantic wisteria, and built an elegant landscape that feels both old world and new world.

Today, dramatic cypresses punctuate the low-maintenance gravel yard, giving it a dramatic vista-like depth. Intersecting pathways follow the “desire lines” of the space, connecting pool to patio to deck to work studio. “The paving detail is where the point of past and present is made most succinct,” says Godshall. Instead of stone, the pavers are pieces of “urbanite,” the fancy term for demolished concrete from the previous design, both literally and metaphorically connecting past and future.

Perhaps most stunningly simple and transformative is the slightly raised concrete pool, an anomaly in a city full of pools that are by default nearly always flush with the ground. “Raising the pool is a riff on a classical detail,” says Godshall. It harkens back to Roman cisterns while also providing a benchlike seating area. “We were subtly referencing the fountains of antiquity.”

“This past year it was such a sanctuary and a lifesaver,” says Tsina. “We spent so much time outside watching it grow in.” Grounded by the pandemic, the couple also used it for work, with Tsina enlisting Bird as videographer to document her new designs for social media. “Kathy would have a new dress in her line,” says Bird. “And I’d shoot a video and compose a loop as a live soundtrack. The yard was great for that, but at some point we ran out of angles.”

Get one year of Sunset—and all kinds of bonuses—for just $24.95.